By forcescompareJune 30, 2020December 7th, 2020No Comments
RAF Mildenhall and RAF Lakenheath located in West Suffolk are home to the United States Air Force (USAF) and other American special forces units.

The surrounding market town of Mildenhall and the village of Beck Row are both in close proximity to the USAF bases. They are both home to around ten thousand American military men and women, as well as many of their dependants; since the 1950s.

The many military personnel there have really made this little corner of England a home from home. You’ll regularly see stunning American muscle cars, SUVs and other oversized vehicles driving around – barely able to fit around the narrow country roads.

It is not uncommon to see signs reminding the airmen and women to correctly navigate roundabouts the correct way – as it has been known for some visitors to drive around them in the wrong direction.

The area has a great American community feel, as many former USAF now live in the surrounding villages since retiring.

You regularly see the stars and stripes of the American flag proudly hung from their homes or flagpoles erected in their front gardens. 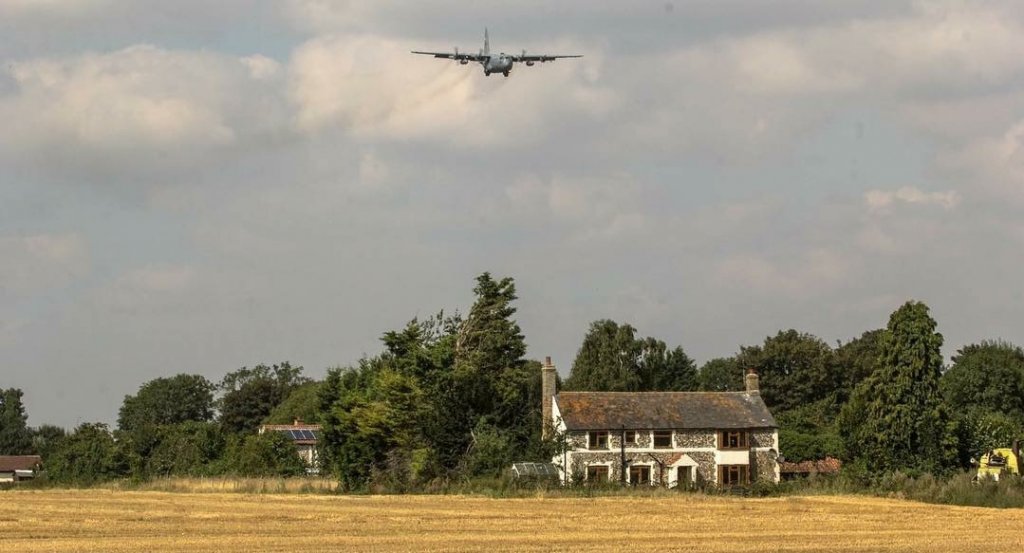 Every evening at 17:00 hrs at the lowering of flags ceremony on base, you can hear the national anthem of both the United Kingdom and the United States play out over speakers – It can be heard as far as the village of Beck Row and town of Mildenhall.

It is a very popular location for aeroplane photographers too, as you can see many U.S. aircraft practising drills in the skies over Suffolk. You can even pay for services such as haircuts and takeaway food, in the local shops outside of base using U.S. DOLLARS.

This is because many Americans transiting through to mainland Europe, making an aircraft fuel/administration stop, have no opportunity to get pound sterling. So, the shop keepers willingly accept dollars as payment.

On base, it is a different story, they have all the services you could wish for – including American fast food restaurants, bowling alleys, grocery stores selling the best American produce and more.

Security at these bases is paramount and are guarded 24/7 by highly trained and heavily armed personnel. Even President Donald Trump made a secret flying visit to RAF Mildenhall in 2019, en route to meet North Korean leader Kim Jong-un in Vietnam.

Suffolk and the East Coast of England is home to many pre/post World War Two UK and American air bases, mainly due to its geography and flat landscape, perfect for runways.