Firstly, Merry Christmas – the fact you’re reading an article on military retention means you’ve run out of turkey or your partner is doing your head in. Alternatively, you could just be counting the days until you return to work or you’re a complete pest who gets their kicks out of reading these sorts of things – which means you’ve never had a partner.

I need to lay out some assumptions before I get into the meat of this.

A happy soldier is a walking/talking recruitment tool.

No one has ever signed off because they enjoyed it too much.

Military humour has been a core message across recruitment for as long as i can remember, the brotherhood, belonging, stories of having life long friends from depot. Some of my best moments during my service came from laughing while being in the worst situations. Asking any veteran “Do you miss anything about serving” 99% of the time you’ll just get “the blokes”

I want to give as full a picture as possible explaining why the Army fails itself sometimes, from Its inability to move with the times and knee jerk reactions that create more negative press than the original “offence.”

In short. The Welsh Guards have had a bit of a rough week. On Christmas eve at 5pm they were informed they were being deployed to help clear the port of Dover and must be ready to parade on camp at 7am Christmas morning. Its shit – but you’re in the Army so suck it up and get on with it.

In Dover they arrived to find 40 beds allocated for the 85 PAXs and were straight away put on Night shifts from 7pm till 7am, their Christmas lunch was a pot noodle, a festive chicken and mushroom to be precise. 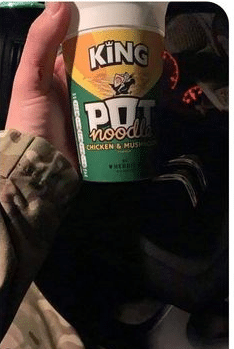 All in all its relatively shit timing for everything, but shit happens, least they’re in it together.

A few days later a soldier sitting on stag, was recorded being wound up by his mates about additional duties that would mean they lose New years eve as well. He took it wellish, everyone laughed, everyone remembered for a moment that even at the worst of times, blokes can still have a laugh.

This is where our story can take 2 paths. They are very much a T junction.

1) As COC be grateful that even during what most people would accept is a major dicking the blokes are still ploughing though it with a smile on their faces.

2) As COC punish the lads that dared to have a laugh and show the Army in a good light.

The reason I have so much contempt for taking option 2 is that you can’t create these moments, they have to happen organically, Capita and Army media could spend ££££ taxpayer money and never get the same authentic experience of belonging. More importantly, an AGAI for winding a friend up will crush more morale than losing Christmas ever could.